The third stage of the DMIS is minimization. During this stage, the learner begins to find commonalities between themselves and people of other cultures. Superficial cultures are mostly judged during this phase of the model. Some examples of superficial cultures would be eating, money, and many others. People in this stage begin to recognize that all people are people, whether they have different traditions and cultures or not (Cushner, McClelland, & Safford, 2012, p. 158). Many teachers fall into this stage of the DMIS. 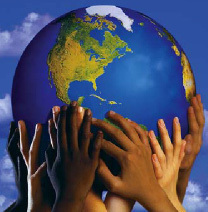 restructure.wordpress.com/
Common phrases that learners might use at this stage are:
"I have this intuitive sense of other people, no matter what their culture."
"It's a small world after all"
"Technology is bringing cultural uniformity to the developed world."
"No matter what their culture, people are pretty much motivated by the same things."
(Cushner, McClelland, & Safford, 2012, p. 159)


This stage is often the most difficult to move from because people at this stage think that they are doing okay (Cushner, McClelland, & Safford, 2012, p. 158). In order to move from this stage, learners need to develop cultural self-awareness and experience difference (Bennett, 1993). Learners will also benefit from strengthening listening skills, open-mindness, and working on the ability to perceive others accurately (Bennett, 1993).
Powered by